I took coffee to my parents a few weeks ago. We tend to do sit-down visits around beverages with my family. It’s always interesting the direction those conversations will take. My parents always want a full report on how the kids are doing, but once we had covered that, we moved on to books and movies.

I was telling them a conversation I had recently with Stephen concerning World War II and the Cold War. Stephen is an avid reader about those topics and I had recently posed a theoretical question to him and was astonished by how thoughtful his answer was. Quite honestly, he had probably already considered the question because the answer he gave was detailed and nuanced. He knows more than I do about that topic.

As I was telling this story to my parents, I could feel myself getting excited and I concluded with, “I think this is my favorite part of parenting… when they start to integrate everything they’ve learned, draw their own conclusions, form their own beliefs, and you look at this person and think, ‘I may have had a role in making you, but you are becoming wholly your own person.'”

My parents were just smiling at me. Indulgently. Wistfully. My Dad nodded and my Mom said, “It is the best.”

I think the way they looked at me will stay with me forever. In the moment, I saw us as parent and grandparents both proud of this kid we loved. It was only later, scrolling through Instagram, that I saw this meme and my thumb halted. 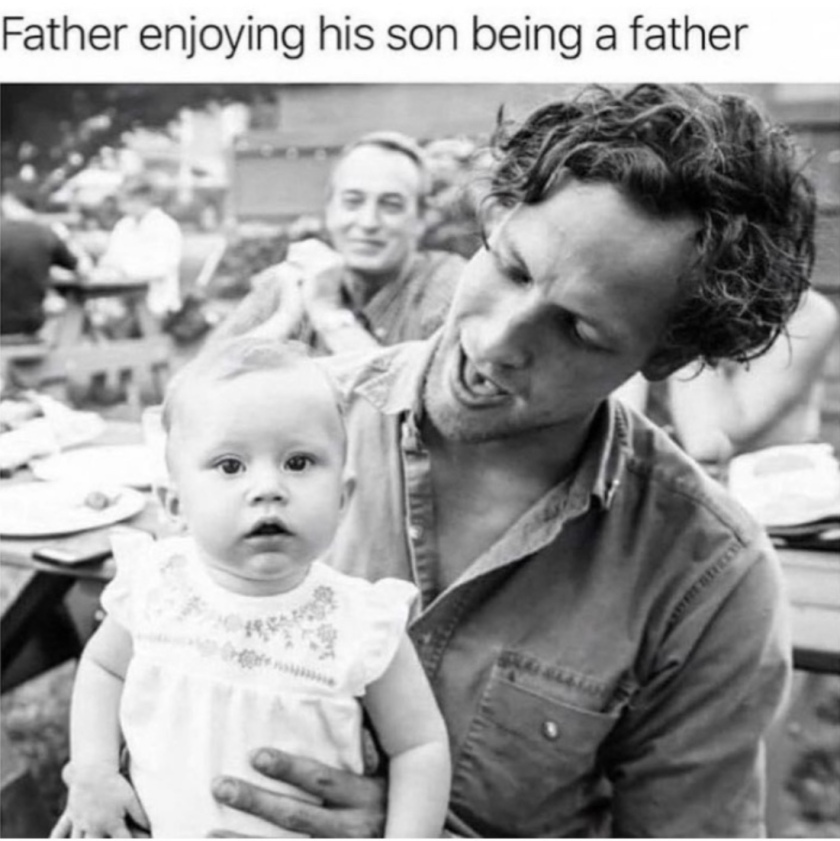 When I saw this picture, I saw the father in the background first. I saw his face. I saw the delight in his son. And I remembered the faces of my parents looking at me as I gushed in pride of my son. And I knew. The look on their faces wasn’t pride in Stephen’s knowledge of history. It was delight in their daughter being a mother.

It made me realize this gig of being totally in love with your kid doesn’t end when they graduate, get married, get a job, or whatever. I will be dazzled and delighted by them until I draw my last breath. I also realized how blessed I am to be the delight of my parents. Everyone deserves at least one person who thinks they hung the moon.

I’ve also decided I’m just going to start delighting more. I’m going to delight myself in some things. We had sunshine for the first time in what felt like months and I took my time delighting in that sunshine as I walked to the mailbox. I delighted in the birds singing. I delighted in the power-half-hour nap I took on the couch at 2 pm. I delighted in the sunset on the way to volleyball practice. Mindfulness is teaching me that I can engage my emotions in the small moments of the day where beauty and nurture show up and it will color the whole day brighter.

What I learned on the Roku

The Roku portion of my February is a tribute to the shows we watched or finished this month on Amazon Prime and Netflix.

This Six-part series on Netflix was so good. We are not cheerleading people by any stretch of the imagination, but that is not necessary. Cheer is a a documentary about Navarro College’s competitive cheer squad. There are so many underdog stories to root for, but the entire series was such a reminder not to compare your daily life to someone else’s. So many of the kids on that squad were dealing with pain- physical, mental, and emotional. In all their brokenness, they came together for two minutes and performed a near flawless routine. Hooray for glossy perfection, right? Except the beauty of the whole show was in the brokenness, the hard stuff they were pushing through and battling. Those were the reasons they were worth cheering for. We don’t know the hard stuff people are facing under their performance any more than we know the beauty God could be forging out of our own brokenness. We could be on the cusp of our own “Daytona.” Whatever the case, the real story is in the journey.

I know. I’m the last person in the universe to behold the beauty that was and is Downton Abbey. There’s so much to love about this show. The costumes. The setting. The humor. The history. The heartbreak. The cast. Dame Maggie Smith, for the love of God. Has a better television character EVER existed? I could write a book about this show, but I think it boils down to this: there was something magical about the writing and the actors that made me care so much about the characters. Call it kismet. The villains were redeemable. The heroes were flawed.

There was a scene in one of the later episodes when Mrs. Baxter’s kindness to Thomas completely changed my opinion of him. I had hated him, with (at best) minimal sympathy over the course of the show. He had been wretched to just about every character including himself. But Mrs. Baxter saw goodness in him. And if she saw goodness, there was goodness to be found. How we treat people can give them the dignity it takes for others to see their value as well.

I will never get over Downton Abbey. 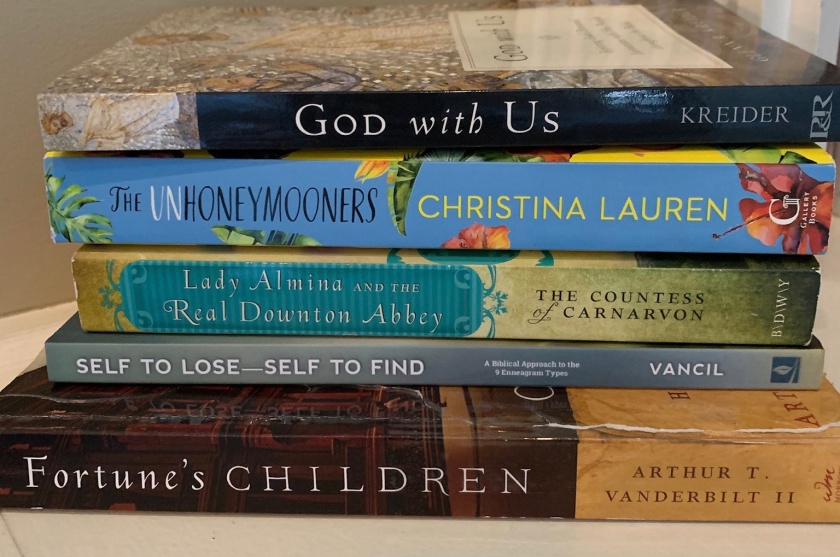 From the stack at the top, I did some nonfiction reading on the real Downton Abbey, Highclere Castle with Lady Almina and the Real Downton Abbey. It was interesting to see some of the parallels to the show, particularly the history around World War I. Interesting fact, the Carnavons of Highclere bankrolled Howard Carter’s excavation of King Tut’s tomb.

I also read up on the Vanderbilt family. The time period paralleled Downton Abbey, but of course it was defined by their rise (and fall) during the Gilded Age in the United States. Fortune’s Children is family history to Arthur T. Vanderbilt II, and this book is well written. He highlights different time periods through the lens of one family member. It reads like easy fiction- this family knew extravagance and disfunction, in spades.

Self to lose- Self to find is a faith based look at the Enneagram. I’ve been diving into the Enneagram recently and this was a good resource. I’ll probably have more to say on that in the future.

The Unhoneymooners was my fun fiction for the month. It had some Pride and Prejudice themes in it, namely, what we assume about people when we first meet is not always accurate. The Elizabeth Bennet character comes from a large Mexican American family living in Minnesota. The dialogue was very funny.

God with Us by Glenn Krieder is a book I have had for ages and finally decided to read. It was an exploration of the presence of God throughout Scripture, not just at the arrival of Immanuel Jesus. My biggest takeaway from this book was that so much of what we know about God in Scripture is anthropomorphic. We ascribe human trait to God because that’s the only way we can attempt to understand him. God has condescended to us and allowed that because He wants a relationship with us. But that means that it is not the whole picture of who He is. We see through the glass dimly. We have to hold tension to the mystery that He is infinitely more. Even the language we use to describe Him is not sufficient because language is anthropomorphic.

The last book I “read” is a screenshot from my Audible app. The Crooked Little Road to Semi-Ever After Happiness is a beautiful memoir about a family’s journey through childhood illness. A daughter is born with an unknown blood disease and the fragility with which Heather Harpham writes is akin to the condition of her daughter at birth. This quote at the end is a keeper:

“Between us was the future. Who we would become as we grew older, as the kids left home. And also the future of the two small people we loved most, our aspirations for who they might become, the revelation of who they already were. All of this reverberated in the gaze we held for a long time. Brian lifted his wine. We clinked and pressed glass against glass, globe against globe. ‘To the end,’ Brian said.

We took a trip up to Asheville. The Downton Abbey Exhibit is at the Biltmore through April, so it seemed a good time to revisit this city. We were last there fourteen years ago, when we lived in Tampa and a mountain vacation seemed the right thing to do in the summer. Traveling with teens as opposed to an infant and a toddler is infinitely easier. But still, I have fond memories of both trips. In the picture below, we had just bathed those babies in the antique claw foot tub at the B&B we stayed at. I was feeding Lindsey and Stephen was playing with a truck. Paul had put Harry Potter on the television. We were happy and cozy in our vacation digs. In the recent picture we had just checked in to our brand new hotel. We were about to walk to dinner, where we would enjoy a leisurely meal that did not feature chicken nuggets or toddler tantrums. These pictures tell me that I have loved every stage. They tell me I will love whatever comes next.